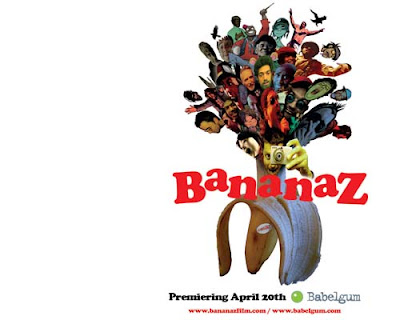 I originally posted a review of the film Bananaz on the ASIFA-east blog which is below in case you missed it. I wanted to follow up that review with the interesting way in which they were going to market this film. The preview I saw was held at the Apple store in SoHo. Apple’s interest in the project was that they were teaming up with Babelgum.com, a new online music/entertainment platform with a global approach to web-video, to release the film. By downloading the Babelgum player to your iPhone you will be able to see the film before anyone else. It is important to say that Babelgum is an internet and mobile TV platform supported by advertising. Bananaz is going to premier on April 20th and will be exclusively available there for a month. Following the online release, the film will have a theatrical run in select cities, and finally a DVD release in May/June. This is the part I found interesting, that it was going to premier online FIRST. I have not heard of a documentary film marketed in this manner before. Most films seem to start with a festival premier, in the hopes of finding a distributor to market and promote their film. This approach seems to be exactly opposite of that; build an online audience first, then the theater release followed by the DVD sale. I thought this was a very smart approach for the filmmaker. The number of people you can reach at a festival is very small in comparison to the potential number you could reach if it is a success online. The Gorillaz are a proven commodity with a huge fan base; based on that alone the film should drive a lot of views to the Babelgum site, which as mentioned above is supported by advertising. I don’t know that this approach would work for a documentary on “Flowers” for example, but I am very curious to see how it goes for Bananaz.
Posted by justsim at 6:19 PM

I cannot WAIT to see this film!!!