A Haggis in NYC 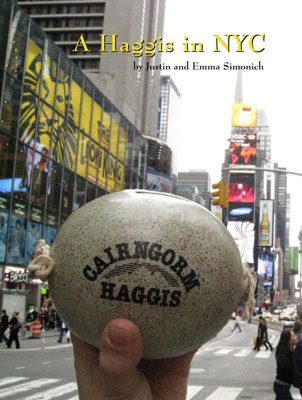 I was given a stone haggis as a gift last spring and I thought it would be fun to take it around the city to welcome it to its new home. I spent a week photographing it all around the city which resulted in this photo book. The book was originally created as a gift to leave for my relatives in Scotland after I stayed with them, but it was so well received that I decided to make it available for sale on the web. It was a way to blend an icon of Scotland with the sights, sounds and smells of New York City. Anyone with Scottish heritage, who is living or just visiting NYC will enjoy this book. To look through the book, or purchase it click here or on the link below.

Here are a few haggis facts you may not have known:

The present World Record for Haggis Hurling has been held since 1984 by Alan Pettigrew, who threw a 1.5lb haggis an amazing 18 feet and 10 inches on the island of Inchmurrin on Loch Lomond. The sport is said to date back to early clan gatherings where wives would throw a haggis across the stream to their husbands, who would catch them in their kilts. The contemporary version is for the haggis to be hurled as far and straight as possible from an elevated platform (quite often a whisky barrel).

According to the Guinness Book of Records, the largest haggis on record weighed 303.2kg (668lb 70z) and was made using 80 ox stomachs by the Troon Round Table, Burns Country Foods and a team of chefs at the Hilton Hotel, Scotland on May 24, 1993.

A Haggis in NYC
Posted by justsim at 2:17 PM

WOW, you put a whole book together!

Nice pics, too!... How was the company you went with for publishing?

The company was great and the quality of the printing was too. The upload process was a bit complicated, but once I figured it out everything was fine. If you want just one copy, of a bunch of them they viovio.com is a great option.