I got somethin' to tell ya 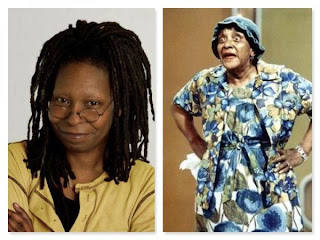 I recently had the opportunity to animate about 5 min of footage for a documentary on Moms Mabley, directed by Whoopi Goldberg. Moms was one of the most successful entertainers in the 20s and 30s on the Chitlin' circuit and only later became known as "Moms" in the 50s and 60s as she was a motherly figure to many comedians during those decades. I handled the animation directing, and design on this one too. On stage she dressed as a disheveled, toothless woman in a brightly patterned house dress with a floppy hat which gave me a lot to pull from. It was fun getting to animate a "real" person and draw from her mannerisms and quirks in order to instill that into her animated version.

The film premiers this Saturday at the Tribecca film festival. Catch it if you can and enjoy the animation.
Posted by justsim at 11:30 AM