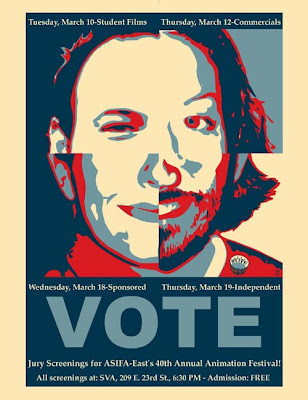 It was time again for another ASIFA postcard. The theme this time was for the upcoming ASIFA festival screening night. Believe it or not this is the 40th Anniversary of the festival.

One of the best advantages of being an ASIFA member is the ability to vote on who wins the festival. So many times when I speak to people about ASIFA, and ask if they are entering the festival this year they often answer, “Why bother, the same people win every year.” Nothing could make me angrier than that response. To them I answer, “Did you go to the screenings, did you encourage others to go and vote, and voice their opinions?” If not then you have nothing to complain about. NY is a city of independent animators; a number of whom are very prolific film makers and they win from year to year because of that tenacity, plus the fact that they are good film makers. The winners of each category are chosen by the people sitting in the audience on that night. It’s the truest form of democracy in action.

I had the pleasure of being invited to the Academy of Motion Picture Arts and Sciences (The Oscars) screening of the short films here in NYC by Candy Kugel this year. It was an exciting day to be in a room surrounded by legendary film makers. The short animation category is the only category that the Academy allows to be screened together outside of LA County. On a weekend when the Oscars are taking place, and knowing I was in the room when the winners were selected is exciting. Maybe, just maybe, the conversation I had after the screenings had some little, itsy-bitsy, slight influence on an academy member’s choice to win an Oscar. To be part of the academy’s club, you have to have been nominated in the past for an award. To be a voting member for the ASIFA Festival all you have to be is a member. THAT”S IT! Pay your dues and you can directly influence who wins the award that year. Whether you’re Howard Beckerman, or a student in school your vote means exactly the same thing. ASIFA East has survived for 40 years as a volunteer organization of dedicated professionals with the sole interest of promoting animated films on the East Coast.

This year has been a year of change for so many reasons, not the least was the election of Barack Obama as our president. As the message for this month’s postcard was “Get out and vote!” I decided to design our post card in the style of Shepard Fairey’s iconic Image of our president. I combined the images of four of our board members into one for the postcard. Just as Shepard Fairey didn’t name the photographer who took the reference for his iconic image, I will never tell whose images I combined together to make the postcard for ASIFA.

I am glad to say I am a member of ASIFA East and I will be there each of the nights casting my vote.
Posted by justsim at 10:44 PM

And, to bolster your argument, Art Metcalf (a virtually unknown newcomer) won the Best in Show last year with his student film, "Fantaisie in Bubblewrap."

If that doesn't speak to the democratic process of our festival, than nothing does.

ASIFA-East is the only animation festival in the world with an open jury screening and winners picked exclusively by the voting members.

Well said too Dave. Interesting to know we are the ONLY festival with an open process. Very cool...