Here is my board for the 3rd annual "3 feet high" skatedeck show. The show opens in Hoboken at Maxwell’s Bar and Restaurant on June 23rd, so come out and play with us! Shenanigans begin at 7pm and usually last untill 10pm. Skate decks from past shows can be seen at http://3feethigh.kneehigh.net/
Posted by justsim at 3:23 PM No comments: 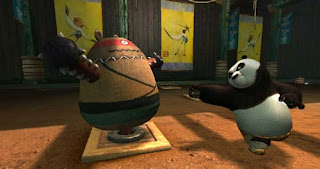 I went to an advance preview of Kung Fu Panda last night at the IMAX theatre here in Manhattan courtesy of ASIFA East and DreamWorks. I am happy to say that it was the best animated effort put forth by DreamWorks in a long time. The film was well written, looked great, and the animation was well done. DreamWorks stayed away from the trap that they always seem to fall into by avoiding all the pop culture references which usually dates their films instantly. This film has a real story as well. The voices in the film didn’t distract from the characters either; I had to watch the credits to see who voiced many of the characters. Coming from the perspective of an animator, I feel that the character comes first and then you find a voice that suits that character, not the other way around. So often in the big budget films I feel as though they cast the actors, then build the character around them. I hate it when I see a film and I’m distracted by the actor they chose to portray a character. All that being said, Jack Black was the perfect choice for the Panda (Po). So much of his energy and wit was carried through to the final product. I think this is the first ‘classic’ that DreamWorks has put out there. Whether you’re an adult or a kid, if you like martial arts films, laughter, and a cute story, go see Kung Fu Panda.
Posted by justsim at 3:04 PM No comments: